This summer I had the opportunity to visit one of my favorite country's in the world and that was Spain. Spain is romantic, beautiful and has amazing food not to mention delicious Sangria!! This summer our family vacation was mainly on the Island of Mallorca ( 150 miles south of Barcelona) however, we started our venture in the one and only city of Barcelona. For those of you reading this, Barcelona has recently been a target of terrorism and I was their with my family walking along the Ramblas, three weeks prior. I can't believe this tragedy took place. My family could have been hit in that attack and it saddens me that their are such evil people in this world. My heart goes out to all those families that have been affected by this random act of terrorism. I pray for the families affected and I hope that one day this can all end. So unnecessary. I reached out immediatly to our new friends we made while there and we were happy to hear that the city was back in movement and that they were not going to give in to these terrible people who caused this violence. With that said, I want to share some of our pictures and highlights of Barcelona. The Catalan people are amazing and I am so blessed that we were able to visit this beautiful city. Enjoy, y que Viva España!!!!

This is me and my daughter at the famous Casa Milá. It is populary known as La Pedrera. Built between 1906 and 1920 designed by Antoni Gaudi. Contoversial at the time because of its stone facade and twisting wrought iron balconies. It is definetly a must see when in Barcelona. In 1984, it was declared a World Heritage Site by Unesco.

This is the outside of the La Pedrera, as you can see the wrought iron balconies.

Rooftop of La Pedrera, the roof is called "the gardens of warriors" because the chimneys appear to be protecting the skylights.

This is me and my family, don't you like our headphones?? So Chic!!

Casa Batlló Is another one of Guadi's masterpieces. Gaudi's work is identifiable as Modermisme or Art Nouveau. the facade is decorated with a colorful mosaic made of broken cereamic tiles. The roof is arched like the back of a dragon. Casa Batllo is about two blocks down the street from Casa Mila.

This is Parc Guell, designed by Eusebi Guell and Antoni Gaudi. It was purchased by Count Eusebi Güell who hired Guadi to create a miniature city of houses for the wealthy in landscaped grounds. Sadly it was a commericial flop in 1914, however a plaza , two gatehouses with roads and walkways were already built. In 1922, the city bought the estate for use as a public park. Though this part of the park is small, it is quite majestic and beautiful to look at. This is a picture of the main plaza.

This is a must see in Barcelona and if you plan to visit , buy your tickets online before going. You dont want to get to the park to find out you cant get in because all times for that day are sold out. This way you have one less thing to worry about.

This is the infamous Lizard or sea serpent that is at the entrance. This is the focal point of the main entrance. My cuite pie Tavio!

This is the inside of the Plaza

The view of Barcelona from the hills of parc Guëll. It is possible to view the main city in panorama, with the Sagrada Familia and the Montjuic are visible from a distance.

One of the two pavillions that resemble gingerbread houses.

This was me leaning against the wall at parc Guëll. The mosaic was just incredible to see.

Gianna and I are standing in front of the Basilica de la Sagrada Familia, a large uninished Roman Catholic Church in Barcelona designed by Catalan architect Antoni Gaudi. Another Unesco World Heritage Site. Behind me you can see the double decker bus, Barcelona Bus Turistic. This is one of two companies that run in Barcelona. A must do , when you visit. It gives you a great synopsis of the city and you can hop on and off to the majority of the main sites to be seen in Barcelona.

As you can see from this picture there is a crane on top. This Church is still under construction. Gaudi was said to have remarked that 'My client is not in a hurry". By the time he died in 1926, only 15 to 25 percent was complete. Construction began in 1883. When the Spanish Civil War took place it went on halt then thru the years its been on and off. As you can see it is back on .

This is another beautiful church and if you visit Barcelona please go visit, however I would advise that if you want to go inside the church purchase your tickets online. Otherwise you will not be able to see it. In fact when we were there, it was sold out for a week. There was a company on the street that offered to get you in, but they wanted so much more money .

This is the Museu d' Art de Catalunya. Omg what an amazing museum and the site itself is just breathless. The museum is behind us in our famil picture. From the top as we descended down, I couldnt resist this view. Just beautiful. My kids were hot, so we stopped for a water break before doing some more site seeing.

This view is from the mall that is across the way in Placa d' Espayna . Busy square located at the foot of the Montjuic Hill. Below my daughter Gianna, is on the rooftop of what use to be once upon a time a Bull Ring. Today this Bull Ring that is now converted into a mall/ rooftop restaurants. I have to say I am happy that most of Spain has made Bull fighting illegal. This was just torture to the Bulls. Our family did visit Barcelona about 8 years ago and we did see a Bull fight, I have to admit even though when we think of Spain we think of Bull fights, it was very sad to see how Bulls were torchered. Bravo to the cities that are taking a stand to ban this tradition.

The Ramblas, this is a 1.02 Kilometer long boulevard in the center of Barcelona. It is the one place that all visitors are bound to pass through on a visit to the city. The middle section of the boulevard is pedestrian-only. At the one end there is a monument of Columbis and these large lions and at the other end, a beautiful park with fountains and statues. Spain's main department store El Cortes Ingles starts at the Ramblas.

My son and daughter fooling around

This is the opposite end of the Ramblas

Hope you enjoyed my photos and a little history of the city of Barcelona. I would love to hear your comments about my visit there.

Celebrating 10 Years and Counting of FDLA

HOW TO PACK LIGHT

The Truth about ...FAST FASHION

The Dos and Dont's of Holiday Style 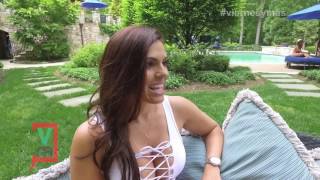